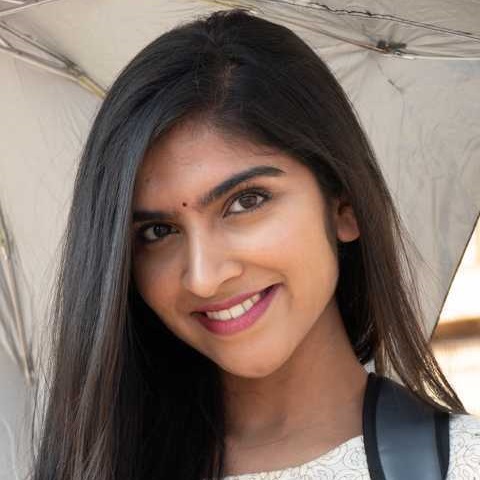 Rhea Ravandur Basappa is 23 years old and was born in Bridgend, South Wales, United Kingdom. Her father is an ENT Surgeon, and her mother is a dentist. Shortly after Rhea was born, she and her family moved back to their home country, India. She was raised in Bengaluru, Karnataka, which is a scenic south Indian state. Growing up, Rhea loved mathematics and chose to study physics, chemistry, mathematics, and biology in her pre-university academic career track. She earned her bachelor's degree in Electronics and Communication Engineering from Acharya Institute of Technology (Visvesvaraya Technological University) in December of 2020.

"OMSCS was a blessing for me."

She chose Georgia Tech’s OMSCS for graduate school because it is a highly ranked school and “has the best Computer Science program in the world”. However, because Georgia Tech is so highly ranked and thus highly competitive, Rhea reasoned that she could not have gotten into Georgia Tech because of the “lower ranking of my undergraduate university”. But she noted that OMSCS made her attendance possible anyway, noting, “Because of the asynchronous nature of OMSCS, more students are admitted. For the on-campus program I felt like I was essentially competing with other students but with OMSCS, I would be evaluated only on my merit.” Rhea also notes that OMSCS has the same curriculum, same professors, and you will earn the same degree as the on-campus program as factors in her decision. The cost was also less than the on-campus, and most other, programs; “This meant that I didn’t have to opt for student loans.” However, perhaps the reason that inspired Rhea to enroll in OMSCS the most was that both of her parents are doctors and were working during the pandemic and as an only child, it was not an option for her to leave them and travel to a different country. Rhea passionately stated that because of all these reasons, “OMSCS was a blessing for me.”

"Since we have deliverables due every week, I am always engaged in class work. There never is a dull moment."

For Rhea, OMSCS is a perfect balance. She likes that the actual class content is pre-recorded and she can watch them on her own time. Also, “Since we have deliverables due every week, I am always engaged in class work. There never is a dull moment.” Rhea further explains that besides the courses, there are “a lot of synchronously online activities. Like office hours hosted by Dr. David Joyner and Dr. Ana Rusch, the GVU Brown Bag series, talks hosted by the College of Computing, and so on”. Rhea affirms the fact that OMSCS students are given access to synchronous online activities hosted by the Center for Teaching and Learning and other colleges besides the College of Computing makes her “feel like I am a part of Georgia Tech as a whole”. She wisely points out that asynchronous classes can be an isolating experience, but it is balanced by these synchronous activities. With this balanced structure, she can spend time on learning course material while also being involved in other activities happening at Georgia Tech. As for what Rhea’s favorite class has been thus far? Well, she contends that it is CS 6750: Human-Computer Interaction because it is very well structured, there are no last-minute surprises, and her peers in the course are very interactive. In fact, Rhea mentioned, “The forums feel very welcoming, I do not feel silly or like looked down upon when asking questions or doubts. I feel welcomed and like I belong in this class.”

For Rhea, Computer Science is so much more than a career. She is passionate about the difference Computer Science can make in the world and how it helped shaped the perception of her country. Rhea explained that in 1999, her parents moved from Bridgend to Bengaluru, Karnataka. This was the same year Bengaluru played a major role in resolving the Y2K crisis. The Y2K bug needed enormous programming effort to resolve, and some of those programmers needed to work in the COBOL programming language. COBOL is a very old language, first created in 1959, and few programmers still use it. Many legacy systems still relied on COBOL somewhere in their tech stack, however, and so numerous systems were still affected. But in Bengaluru, many programmers were still familiar with the language, and many more were willing to rapidly get up to speed on COBOL programming to help the world address the issue.

After Y2K over the next two decades, Bengaluru became the startup capital of the country and earned the name Silicon Valley of India. This incident and what followed not only helped India’s economy but also shaped the perception of India worldwide where, as Rhea notes, “We became a country of software engineers. To me the field of computer science is very dear because of this reason. Being a part of this field is my way of staying connected to my city and showing gratitude to a field that uplifted us.”

"We have built agents that can solve complex mathematical problems, drive cars, win against chess grandmasters, and so much more. There still is a lot more to do. The potential that this field holds for future research is what interests me the most."

Initially, Rhea became interested in computer science because of her city’s history with it. Then she became engrossed in the problem-solving aspect of computer science and is also enthralled by artificial intelligence. As stated by Rhea, “What this field has been able to achieve is truly mind blowing. We have built agents that can solve complex mathematical problems, drive cars, win against chess grandmasters, and so much more. There still is a lot more to do. The potential that this field holds for future research is what interests me the most.” Besides computer science, Rhea is also interested in studying mathematics and cognitive science and wants to study human behavior and thought processes. She also has a passion for education, teaching, and technology, so she wants to research online learning and how to make it more accessible for all. As for if Rhea could collaborate with any one person, it would be Professor Joyner, Professor Goel, or any other professor at Georgia Tech. So, what about graduation? Rhea wants to be in academia and will pursue a PhD, but she also sees herself “being an entrepreneur someday. But that would only be after few years (at least a decade) of work experience”.

After all the incredible work Rhea is accomplishing, a great way she relaxes is through a self-care regimen such as taking care of her skin and talking to her parents—she talks to her mom about clothes design and sews all the dresses she wears, and she talks to her dad about politics and economics. Rhea also loves to dance and will dance to “super loud music”.