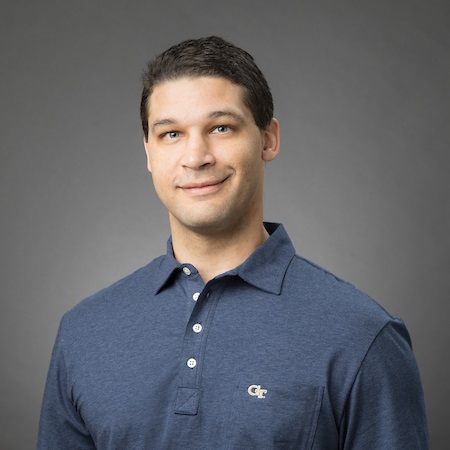 Dominick Blue was born and raised in North Carolina. Dominick proudly joined the military and spent 11 years in the Marine Corps. While in the Marines, Dominick lived in many different places, such as Japan, Australia, and California. He even spent some time in a naval vessel. He graduated with a bachelor’s degree in technical management, which was impressively completed over two deployments and multiple overseas military training events from American Military University. Dominick left the Marine Corps in 2021, began working in crisis management for a while, and now works at Salesforce as a Senior Systems Reliability Engineer. Dominick is in his first semester in OMSCS.

"When I found OMSCS, it spoke to me very strongly because of the flexibility and rigor and the community was strong. It was a strong community for remote learning."

So, what inspired Dominick to enroll in OMSCS? Well Dominick shared that “I spent a bit of time while in the Marine Corps evaluating what I wanted my future pursuits to be. I originally thought mechanical engineering and when I found OMSCS, it spoke to me very strongly because of the flexibility and rigor and the community was strong. It was a strong community for remote learning.” In addition, Dominick mentioned that the specializations that OMSCS offers were unique and really stood out to him because “not a lot of other programs allow you to specialize in the tech realm. The specializations were important to me and my academic goals.” The variety of courses available were also very important to Dominick, as opposed to other programs that offer a set of classes that you must take. “With OMSCS,” Dominick explained, “you get so many options, and you can even do research and have it applied to your degree requirements.” Dominick also mentioned that Dr. Joyner “is one of the reasons that triggered me to apply to OMSCS because I observed how he interacted with students on Reddit and that was so refreshing to see that type of commitment to students.”

To Dominick, computers are a gateway to new realms of opportunities never thought possible to him. Computer science is a field that “discovers the foundational truths about computations” but what is even more fascinating is that “computers have accomplished what was not even imaginable: to take something from the physical world and turn it into the non-physical world and extend the bounds of imagination to unlimited fields.” With this in mind, if he could collaborate with any person, it would undoubtedly be Margaret Hamilton, who worked on the first Apollo code and whose amazing work “pushed the edge of technology and human civilization” as she accomplished something that no human has done before from a computational aspect.

Besides computer science, what other discipline is Dominick interested in? Well, he is very interested in Cognitive Science—it’s one of the big reasons why he joined the Design and Intelligence Lab. The interactions between humans and computers are fascinating to Dominick. All the projects within the Design and Intelligence Lab are interesting to Dominick; however, he hopes to work on “nexus of AI and Cognitive systems.” Dominick’s plans for after graduation are to complete a Ph.D. and “become an applied researcher.” How does Dominick relax after such great work? Well, when he lived in Japan for over a year, he climbed Mount Fuji! But what about when he is not climbing mountains? Well, he likes to disconnect from technology, leave all the tech behind, and go for a hike with his wife and 4-month-old chocolate lab mix puppy named Pretzel.